Arg!  Completely missed the Audie Awards at the end of May two weeks ago (May 28th)!  You know how frustrating it is when you keep on reminding yourself it’s coming up for months, and then when it’s actually time you forget?  😦

Audie Awards are exciting in that they are the biggest awards of the year for audiobooks, narrators, and audio dramas.  In fact, they are often dubbed “The Oscars” of the audio world.

You can look at the list of finalists and winners by clicking here, as well as listen to samples all mentioned.

Although I have not had time to watch it yet, here is the Audie Awards 2015 on video.  Now, hopefully I can remember to tune in live next year!  Arg again.

Have you heard any of these audio productions?  What did you think of them?

Posted by booklearner on June 12, 2015 in Uncategorized

Midday’s We Pick Book Club w/ Rosie de Rosset will take place tomorrow at 12 pm CT (you can also hear it for free for up to a year post-airtime).  Discussion will be about the memoir, “The Color of Water,” by James MacBride.

Posted by booklearner on September 17, 2014 in Midday Connection Book Club

Based on the book by Miles Franklin.

Plot Summary: Sybella Melvyn is a headstrong young lady living in turn of the century Australia. She longs to be able to follow the path of a career for herself, even though her family is struggling to make ends meet in the country. When she is invited to stay with her wealthy relations, she jumps at the chance … and is reacquainted with handsome well-to-do Harry Beecham. When he starts showing interest in her which leads to a proposal, she is forced to choose between a life a with Harry, or a life of independence.

My Review: Disclaimer*: I have not read the original book, so this review will not be comparing it to that novel.  Only as a story in and of itself, totally unrelated to the book.   When I first noticed this film on Netflix, I was surprised to see that it was only rated PG. What, really? I thought, and decided to check it out. The last time I saw a ‘PG’ on the back of a DVD case I thought it deserved a more of a degenerate rating, so I was watching this with fingers crossed. It turns out that yes, this really is rated PG (in my opinion).

I really enjoyed this movie. I knew nothing about it before I watched it, but was immediately taken in by young Judy Davis’s amazing voice (I’m going to check and see if she ever narrated audiobooks!). Was Sam Neill really that young and handsome once? Oh, yes! I appreciated the slow-moving build up of Sybella and Harry’s romance. Not rushed. Not forced. Not much said. Making them wait. Making you wait. All resulting in a quietly culminating plot.

This is a story that gets you to thinking. SPOILER ALERT: Did Sybella make the right decision in the end? It’s hard to say, and I probably will want to go back and watch this again in order to think more about it. On the one hand, my first reaction is that apparently Sybella knew herself well enough to know that she couldn’t ever be really happy with Harry.  I think that she made the right decision for herself at that time.  Two complete people make for a better, stronger marriage.  Sybella seems to make her choice based on the fact that she knows she would not be able to make Harry a satisfactory partner if she didn’t have some time in which she could figure out who she really was first.  But on the other hand, perhaps Sybella makes a blinded choice based on her self-hatred.  Could it be that she loathes her looks and personality so much that she denies herself and the person she truly loves happiness?  If this is the case, then maybe Sybella still made the right choice in that her persistent dislike of herself (left undealt with) could make a life with Harry miserable.  END OF SPOILER.

Some may find this movie boring. It definitely is on the quiet side, but I was not bored due to the suspenseful build up of the plotline. Sometimes we may struggle with liking the main character, but I chose to see her as an imperfect heroine figuring out life just as I am. She makes a mistake here or there, but we all do. Yay for people who know exactly what they want at age 18 and never change their minds and never regret their choices, but I’m not one of them and neither are most people, I’m guessing.  Undoubtedly some will probably read more into this story than I have when it comes to themes of feminism. I just took the story as I saw it..

Have you seen My Brilliant Career?  What did you think of it?  Share your thoughts below!

Posted by booklearner on August 10, 2014 in Movie Reviews 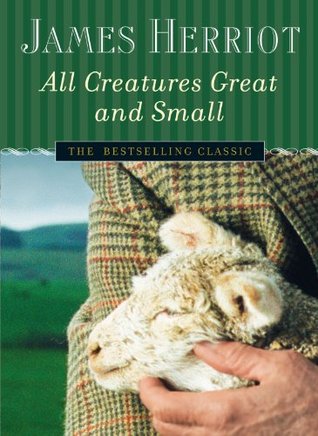 Plot Summary: James Herriot is a young vet fresh out of school and eager to find his place in the world.  He answers an ad for a veterinary assistant in the Yorkshire Dales, and consequently does become part of a different world—a place full of memorable characters, where pets and farm animals alike find a memorable place in his heart, just as their owners do; where farmers with Yorkshire dialect invite him in for a “bit o’ dinner”,  and where the lovely young daughter of one of the farmers soon captures more than his attention.  Audiobook excerpt read by Christopher Timothy.

My Review:  I first heard of this series from my aunt, a farmer’s wife, who greatly encouraged me to read them, saying they were her favorite books of all time.  And if Aunt E. gave high praise for a certain book, you know there’s something to it!  But they really didn’t look that interesting to me.  I wondered how intrigued I could really get reading about calfing and tuberculin testing.

Then I watched the All Creatures Great and Small tv series that were filmed in the 1970’s, and I was sold!  There was something about each little animal story and character that drew you in and made you want more.  So I picked up the first in the series and settled down to read all about the adventures James Herriot, Siegfried and Tristan, and Tricki Woo.

I found the book just about as captivating as the show.  Some time had elapsed since I had seen it, so that the stories in the book were only vaguely familiar, and I never could quite remember how they had ended, so I didn’t feel that watching it first ruined anything for me.  I actually preferred being able to hear the Yorkshire dialect in my head as I read it, something I wouldn’t have been able to do if I hadn’t seen them.

If you look the book up on Amazon, there are over 200 reviews, and very few of them below 3 stars, so that is testament to the fact that they are well-loved!  There is something sweet and simple about it really.  Each dog, each cat, each cow or piglet had their own story, so that it didn’t get monotonous.  Besides, there were plenty of colorful characters to keep the story alive.  The thing that makes the book so humorous is the realistic people and situations.  Siegfried was so hilarious because he reminded me of a few people I know!  I could empathize with James because my dad was a farmer and knew some of the same predicaments (for example, it is an unwritten rule that cows choose to give birth on Sunday mornings right as it’s time to get ready for church).  Another thing I appreciated was that though it is about a veterinary surgeon, it doesn’t get bogged down with scientific names and facts.  I mean, you don’t feel as though you’re reading a college textbook.  The author gives the average reader just enough information to understand the medical situations, but doesn’t bore you with it.

However, I started to get antsy to finish it about halfway through the book.  I can’t say it was because it was boring.  Maybe it was because there was a lack of plot, and it was really just a collection of small, everyday adventures.  There is nothing wrong with that, and it was a joy to read, but I longed to get moving to some action-adventure.  I think it would have helped if there had been more adventures with Tristan in the book.  Thankfully, the romance with Helen moves the second half of the story along to the end.  In my opinion, it was the dates with Helen that were the most comedic.

Although this didn’t really bother me, be aware there is some language issues throughout.

Please don’t pass over this gem!  If you’re in the mood for something quiet and subtle, this certainly will hit the spot!  And then, don’t forget to try out the tv series—it isn’t everyday that a film version does a book credit, but I thought they did it remarkably well!

You can also watch the documentary about the making of the show (unless you hold to the opinion that getting behind-the-scenes spoils the mystery of it).

Someday I would also like to get ahold of the book, “The Real James Herriot: A Memoir of My Father,” by Jim Wight.

Posted by booklearner on March 16, 2014 in Book Reviews